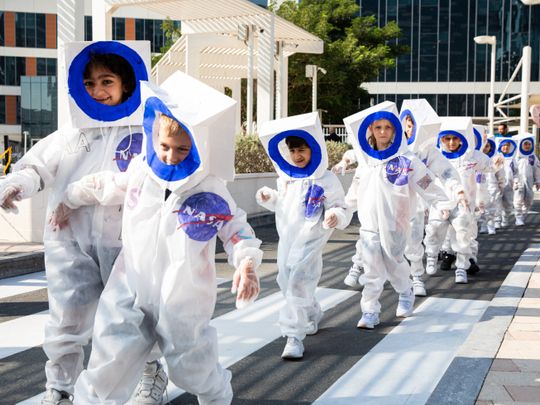 All spacesuits had to meet the strict criteria of Guinness World Records. The students spent weeks designing and making their own helmets and held their country’s flags on their arms, highlighting the diverse UAE community that Repton Abu Dhabi students represent. The official judge confirmed the record on the spot on Tuesday.

Steven Lupton, the school’s headteacher, said: “Today [Tuesday], we look back on the UAE’s landmark mission since it began its incredible journey to the International Space Station more than three years ago. Our students have closely followed the UAE’s milestones in space with an instinctive curiosity and a genuine love of learning about the wonders of the galaxy. We are absolutely thrilled to grace the occasion with this exciting achievement confirmed by Guinness World Records. I want to thank all the students, teachers and staff who made this record-breaking event possible.”

The previous record for the same feat was held by Nerve Center – Our Place In Space in the United Kingdom, who set the record on April 23 this year. This is the first Guinness World Records title attempted by Repton Abu Dhabi students.

Luca Hughes, a fifth year student at the school, was thrilled to break the record.

“My favorite part of the preparation, which we’ve been doing for about a week now, was making the costumes and the helmet. I loved designing the costumes. Breaking the world record means a lot, he said.

“My favorite part has been drawing the astronaut suit and adding all the designs imaginable. I started it by making patterns that I liked to make it lovely,” said Celine Turkiyeh, a 4th year student.

“We can create any models [we liked on the helmets] like little stars, planets or even the NASA logo, it was all up to us. It was a really creative process. We all helped each other as a team so we were all on the same page,” Borovac said.